The Enrolled Pensioner Guards (EPGs) Special Interest Group of FamilyHistoryWA was formed in 2000 by descendants of men who became EPGs – consisting of soldiers who came to Western Australia between 1850 and 1880, most arriving during the years of convict transportation as Guards on the convict ships. They were soldiers who had been discharged from Military Service, and who on discharge from the army, were awarded pensions. 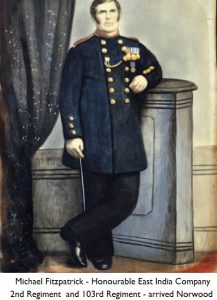 Towards the end of the 1840s when convict transportation to the Eastern States was coming to an end, the Governor of Western Australia backed by leading land owners, pressured the British Government to send convicts to Western Australia. This was done with a view to revitalising the economy and to provide a cheap labour force, as labour was in short supply and expensive.

The average citizen was opposed to the proposal on the grounds of public safety. So it was proposed that any convict sent would be well behaved, have served most of his sentence and be entitled to a ticket-of-leave on, or soon after his arrival. However, over time, the convicts became much more hardened criminals, that necessitated the building of Fremantle Prison. To ensure the safety of the convict ships that each ship had a guard consisting of men who were former soldiers of the British Army, Royal Marines and the East India Company.

Thirty seven ships brought 1,246 individual EPGs to Western Australia 1850 to 1874 and another 5 military men already in the State also became EPGs – so 1,251 men in total: 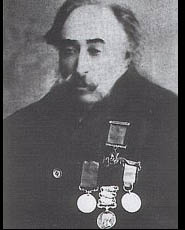 Of the EPGs it is estimated one third were awarded Military Campaign Medals. Records show that where they received Campaign Medals, many received more than one. The breadth of service, battles fought and achievements by men of the Enrolled Pensioner Force includes the Crimean War, South African Frontier Wars, 1st Anglo Afghan War, the China Way, the Indian Mutiny and includes medals such as the Victoria Cross and the Distinguished Conduct Medal see Battles and Medals

The Scindian was the first convict ship with EPGs in 1850 and the 1868 Hougoumont the last. Between those dates thirty-five ships of the forty-three ships which transported convicts to Western Australia had between 28 and 55 EPGs many accompanied by their wives and children.

At the time Military pensions were not a right. Pensions were only awarded to men of merit who had served for long periods of time, had a good record, were totally unfit for further service or had been injured in the service of their country or contracted a disease in that service.

Prior to 1854, all men enlisting in the British army did so for life and the onus was on the individual to prove he was ill or worn out from long service and eligible for a pension. 1854 saw the introduction of enlistment for a limited period.  After 21 years’ service a private could receive up to 1/- per diem, a corporal 1/3, and a sergeant 1/6. Pensions for the East India Company were awarded from the Lord Clive Military Fund and were comparative to those of the British Army. Pensions for the men who fought in the Crimea were awarded through a fund presumably raised from the grateful public, i.e. “Patriotic Fund”.

As an enticement to volunteer as an EPG each was offered a free passage for himself, his wife and children, employment for a limited period after arrival and to those eligible, a land grant and a two-roomed cottage to which they would be entitled to Fee Simple after seven years occupancy and making general improvements. 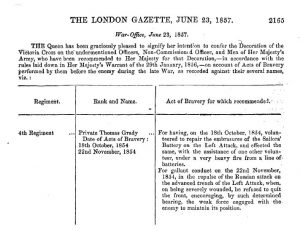 How Thomas Grady was awarded the VC

The land grants varied in size according to location, in rural areas from 10 or 20 acres to one third of an acre in Perth. The areas set aside were known as pensioner villages; the first village established was at South Perth and was a notable failure due to its isolated location on the south side of Perth Water accessible only by boat. Other more successful villages were established at Freshwater Bay, North Fremantle, Bunbury, Busselton, Albany, Toodyay, Northam, York, Kojonup, Greenough, Lake Koojee [Coogee], Willagee Swamp, Perth and West Guildford. Other failures included Port Gregory where the allotments were adjacent to a salt water estuary and those of Kelmscott, Belaring Springs and St. Ronan’s Well which were laid out but never settled.

After the arrival of the EPGs in the Colony they were enlisted for a period performing guard duty at Government House, the treasury, the magazine, the Convict Establishment, convict depots and road gangs as well as attending ceremonial and church parades. From 1862 they were the only Military personnel stationed in Western Australia and as such gave the general public a sense of security needed in a community with a heavy convict presence. Many worked as warders for the Convict Department, in the Police and Water Police forces and in the general workforce in a variety of occupations including shop keepers, tailors, market gardeners, farmers, as well as general labourers.

After the cessation of transportation to Western Australia in 1868 the role played by EPGs decreased. In 1874 the Colonial Office instructed the Staff Officer of Pensioners to reduce the level of expenditure until finally on the 10th November 1880, the Force was officially disbanded. Guards were still required for Government House, the magazine, and the Fremantle prison and in addition a member of the guard was appointed as an orderly for the Governor. So, as a temporary measure, it was decided to form an Enrolled Guard under the command of the Commissioner of Police to be disbanded on 31 March 1887.

The employment of EPGs had many advantages in that there was increased money flowing into the economy through the payment of salaries and wages.  Expenditure increased with the erection of the Fremantle Prison and the Pensioner Barracks at both Fremantle and Perth as well as roads and bridges, much of it paid for by Imperial funds.

The EPGs were available in times of emergency whether from natural disasters or prison escapes.

It was often the pensioners’ daughters, (and sometimes the widows), who provided wives for Ticket-of-Leave men, helping redress what had become a serious problem, namely, the imbalance of the sexes. Western Australia was different from the other colonies in that only male convicts were transported. Although it was possible for a married convict to apply for an assisted passage for his wife and children to be assisted immigrants, the offer was not often taken up.

Many dedicated members have allowed us to build a significant body of research:

F. H. (Frank) Broomhall’s  seminal 1985 book The Veterans A History of the Enrolled Pensioner Force in Western Australia, 1850-1880 has been the cornerstone of research into the EPGs.

M.S. James’s outstanding research in her 2016 book A Superior Body of Men built on Broomhall’s research and for first time enabled us to make a more accurate account of the men on ships for which no list of the guard was available.

To extend the scope of these we launched this website in 2018 to focus on EPGs and where possible their families. Online publication of the service records (WO97), pension district payment records (WO22) and the Regimental pensioner registers (WO23) enabled us to identify nearly all the men we know came to Western Australia as EPGs.

The research for the website was initially established in 2011 under the direction of the “Ships Project” and its “Admiral” Margaret Hickey, who directed a group of researchers known as “Ships Captains” to build a profile for each EPG and wherever possible, their parents, siblings, spouses and children.

The most significant and widely used resources and references to develop and present the information on the website include the following:

Other more specific references were also used which are more related to individual profiles. Information regarding these resources can be obtained through using the Contact Form listed under the Contact Us section of the website.

Thanks to all who participated in developing and researching EPGs. Future contributions of information (once checked) from descendants of EPGs or other interested parties will be acknowledged as resources that enhance this website.

Special thanks go to Margaret Hickey and her Captains: